I saw this when we came to One City for a night walk. Nowadays, Main Place, One City and Taipan have turned into my hang out areas because my friend stays in that area. Also, USJ is only 15 mins drive from my house. I noticed that the Koreans like competition and purposely open Korean BBQ buffet next to each other. In this regard, a young Korean lady mans Sang Nae Deul which is beside Assa opened by a Korean elderly lady with her family. In Korea, restaurants are a family business. Sang Nae Deul did not have so many varieties and I could only choose 4-5 pork and meat with the normal side dishes so I decided on Assa. Also, I noticed there were not many people inside the former but Assa was quickly filled by by 8 pm whereby almost every table was occupied.

The best part is that the price includes GST and also no service charge! How great is that in our slow market nowadays?

There are many choices for steamboat but of course we should not compare with Fat Man because Korean ingredients are expensive.

Every table is served with 3 Japanese style plates of sliced raw chicken, beef and pork. The portion was so much that we did not manage to finish the chicken. I liked to eat the thin sliced beef and pork to be dipped in the boiling and soup and wrapped with salad and Gochujang sauce, the Korean way. 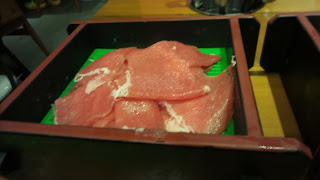 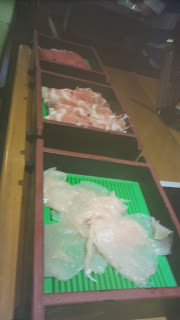 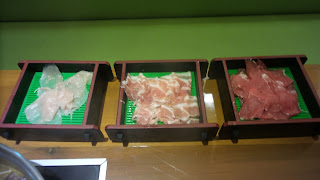 We were famished so we rushed to the ready food corner first and took these: 2 tempura Shimsamo, fried Korean rice and my favourite, Kimchi fried rice which was so delicious though it was cold. The other deep fried breaded items are not good because it was already cold and nothing used to keep it warm. The lightly fried dried mushrooms were tasty. There was also Kuro Yok (Deep Fried Pork Balls) which were good too.

The Korean Pancake with Kimchi is better than the one without which looks like flat omelette. The Kimbab was amazing, neatly folded and made and tasted so good that I had to have another one despite feeling so full at the end. 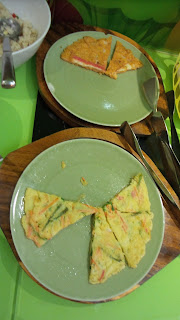 There are also the conventional Korean appetizers that they usually serve in Banchans such as cabbage kimchi, fishcake kimchi, the best sweet fried peanuts, french beans, mushrooms, Acar (sliced cucumber and carrots), sweet fried pumpkins, and delicious non-oily Korean glass noodles. There were also sliced sausages with red and green capsicum and onions with chilli oil. My favourite is the sliced mushrooms with garlic in blackish soy base sauce which I have turned into a sauce for dipping too. 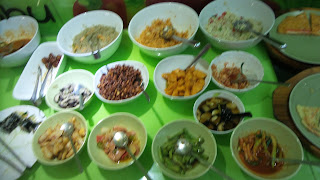 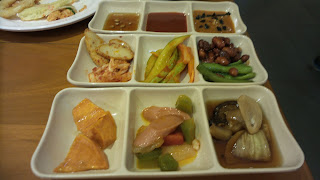 I also could not get enough of the kimbab here which were made neatly with radish, carrots and etc. I loved it so much I could not resist another one even though I was so full. 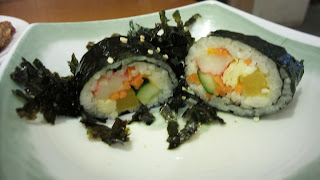 There are a few sauces available such as the typical Korean BBQ sauce in salty and orangey version and also the red Gochujang Hot Pepper Paste, and soya sauce with garlic. 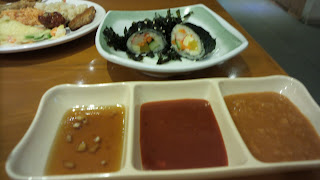 They also keep refilling the food so fret not if you do not see much left. In fact, I think they are so busy serving people. The best part about the Koreans is the high level of service and hospitality. Despite the busy atmosphere, the Lady Boss even asked us how was the food and even went to each table to check whether the customers feel alright.

There are also tofu, radish, eggs, 5 types of fishballs, sausages and fried foo chuk. The vegetables range include bean sprouts (a little weird for this is not the typical steamboat ingredient), pumpkin slices, broccoli, spinach, salad vegetables (the expensive type), corn and black fungus.

There are also few varieties of mushrooms such as dried mushrooms, big giant mushrooms, oyster mushroom, king oyster mushrooms, straw mushrooms fulfills were my idea of a steamboat. Furthermore, normally if you visit places like Bone Steamboat Restaurant or have ala-carte steamboat, mushrooms are always expensive at usually RM 8 and above for a plate. 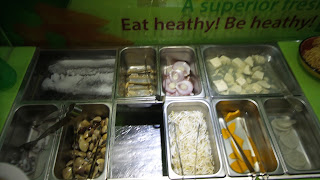 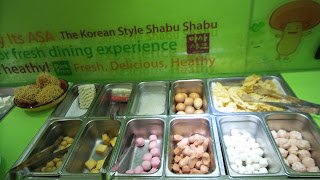 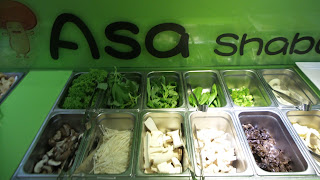 The only fruit is watermelon or we could opt for the Nestle ice-cream.

For drinks, you could get your own mango juice, green tea or corn tea at the counter and add in ice cubes as you wish.

The main drawing point for me is the BBQ Station whereby I need not sweat over my own BBQ pit to barbeque food. Yeah, I am that lazy. Also, I am not that good in seeing whether my meat is cooked and it's easier to have someone cook everything I select. We even saw the lady boss help the employee do some BBQ as she probably wanted to ensure the quality control. There was quite a selection of Korean beef, ribs, chicken and beef at the top layer of the freezer. 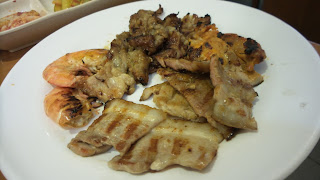 There are also skewered BBQ at the bottom such as dried mushrooms, small octopus, small prawns, sausages, and chicken. 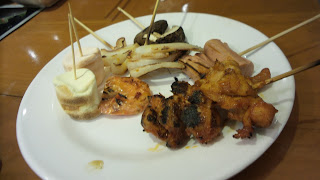 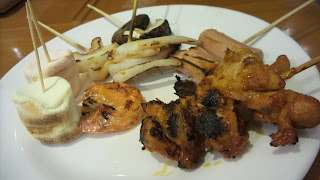 I like the skewered marinated chicken very much because of its tenderness.

Greedy me could not resist not trying everything so I just had to try the Korean glass noodle salad which was not bad. Of course the photo shows more ingredients such as acar and shredded seaweed and mushroom; 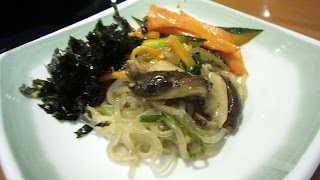 Overall, I would rate this place 8/10 for the reasonable price and food. We cannot complain about the size of seafood due to the low prices.