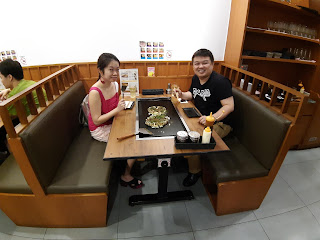 I suddenly had the urge to eat Okonomoyaki after seeing our Osaka photos so I began googling for it and found this place in Sunway Giza specializing in only Okonomoyaki and Yakisoba.

It has been about 4-5 years since I came here and Sunway Giza has changed totally in terms of having a lot of shops and even a weekend market. It's convenient as there is even Village Grocer here so we can do our groceries after lunch rather than go to the hypermarket in another place

The entire cafe is manned by only one guy which is quite pitiful because he is the cashier, cook and also waiter. 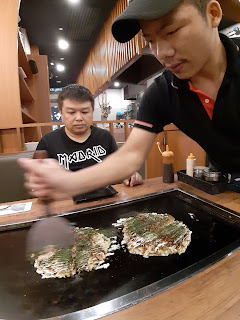 They have all kinds of fillings for the Okonomoyaki from  pork (buta) to prawns, beef, and even mochi. I wanted so much to try the mochi version since I haven't tried this in my life, but it was not worth the money to add RM 6 for mochi to the RM 28.80 mixed okonomoyaki.

Eating Okonomoyaki at this restaurant reminds me of our Osaka holidays because they serve the Okonomoyaki  on a hot sizzling BBQ plate on each table. One can also opt to make the Okonomoyaki themselves which we didn't as we worry we didn't how to do it well. After all, the same price is charged.

This is actually Mixed Okonomoyaki  with pork, prawn and squid which was quite delicious and mirrors the one in Osaka except they don't have bonito flakes on top but uses bonito powder. 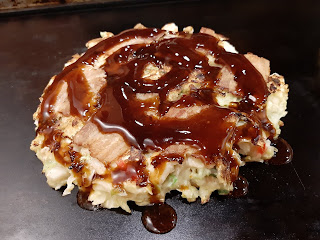 This is just normal Okonomoyaki  with soba inside. Nothing special to me, just a whole lot of carbs and quite fattening. 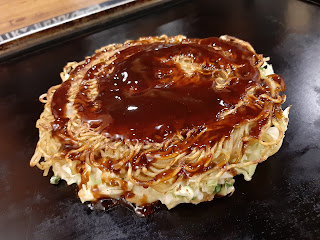 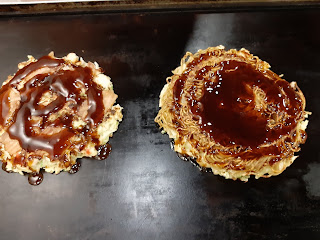 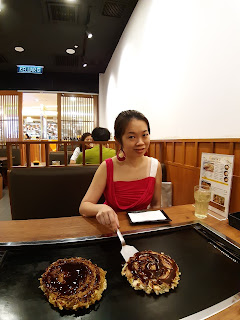 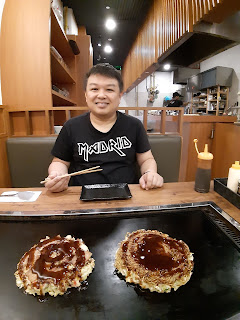 Green Tea (refillable) cost RM 2 per pax. The price of Okonomoyaki is quite reasonable but there isn't much choices for food here so perhaps that was why the entire restaurant only had 3 customers at lunch time on a Saturday. Also, it is quite pricey to pay a total of RM 62.25 for 2 Okonomoyaki only which is basically flour and some seafood. There was also service charge of 10%. We could eat better food at cheaper prices in the restaurants outside Sunway Giza. 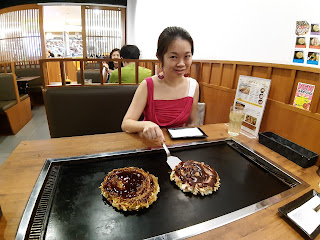 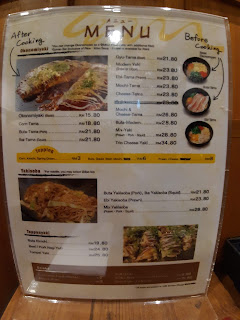