Every pilgrimage trip I make to Penang, I must always have my Fried Oysters. Since young, I only ever eat Fried Oysters at Super Tanker food court which has a lot of big oysters and quite cheap at RM 10 for small portion. Even this time when we had lack of time, and we are going to Charity Dinner in the Lip Sin school, after dropping the elderly, we went for my oysters. 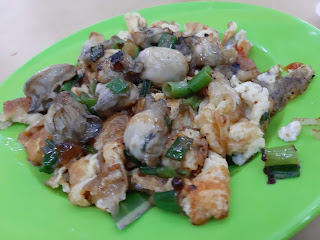 The fried oysters is simply heavenly, huge oysters to boot! It also doesn't have an overload of starch like the one in New Lane. So that's why when it comes to Fried Oysters, mum said it is better I go for my personal choice  rather than follow those in google, which is why I have made my mind to write as much as possible about Penang Hawker Food
Posted by Heaven Angel at 1:10 AM