My friend was so hungry and he got angry waiting for me to finish my work for dinner. We almost quarreled over this. I felt bored and wanted to have some tasty food to spice up my life. Sure enough, nothing can do justice than Thai food which I found online in a new discovered area called Taman Bukit Desa called Moobaan! I spotted this place in some blogs and found out the awesome discovery of a bunch of new cafes that I have known existed with very reasonable prices of less than RM 10 per bowl of main dish in KL area! Amazing right!

Moobaan has a very colourful interior that makes it look like the Street Stall it models after but in a very super clean environment and cosy ambience and minus the Thai traffic. The added bonus is the originality of the food as the waitresses and cook are from Thailand and the cook is of Chiang Rai origin. 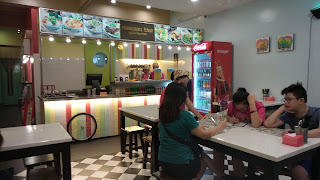 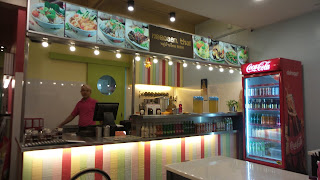 The noodles are also smooth and absorbs the kuah fully. 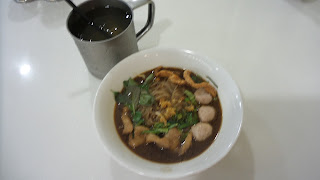 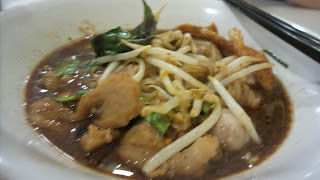 Fancy having the best, juiciest BBQ pork neck that is not overly oily and salty or like the ones at Kissaten for half the price at ONLY RM 10? Well look no further and for a non-pork lover like me to scream GO FOR THIS! You can imagine what I mean! The sourish and sweet sauce that comes together was amazing too. 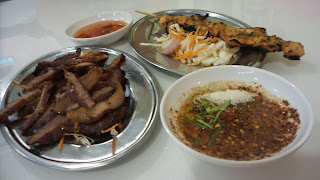 Gai BBQ (RM 3)
This is BBQ chicken meat in a stick but the meat is overly dry and do avoid ordering this.

The pad thai is not oily at all, not soggy/dry and has so many ingredients such as small fried tofu, ku chai, bean sprouts, small deep fried shrimps Thai Style, egg and also deep fried prawns. This is by far much better than the Thai restaurants in Malaysia. 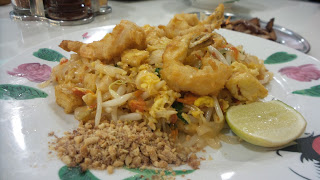 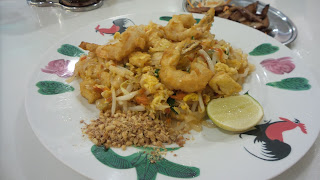 This is served in stainless steel cup to retain the coolness. 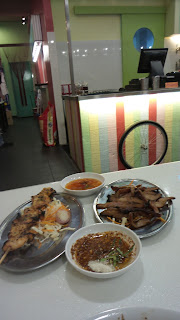 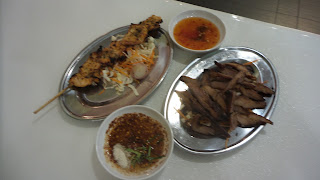