It is very rare that I keep coming to Midvalley but it has been the two weeks in a row that I do this this time round to visit the Tastefully Food and Beverage Exhibition. We wanted to try the Ippudo Ramen which has a branch in Gardens but there were quite a number of people queuing up so we decided to go back to try Ichiriki which I haven't tried before. The bamboo decoration look so similar with Yuzu which is located 2 levels up in the same location. Both restaurants have set meals at RM 25-30-40 which is quite reasonable given the portion. I was tempted to order most of the set meals which come with sushi / nabe / grilled salmon etc. Sometimes I feel it is much cheaper to eat Japanese food in Malaysia than in Japan itself whereby 1 simple main dish like ramen with meat can cost RM 40 (1000 yen).

I ordered this because the other set has rice. I opted for ramen as I am not a big fan of thick noodles like udon. The good thing is that albeit being cold noodles, they still serve pork soup at the side so we can dip the noodles inside. The ingredients such as 3 slices of pork, carrot, cabbage, bean sprouts, greens, black fungus and 2 runny yolk eggs were just amazing! 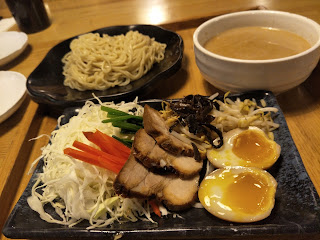 I was craving for unagi for a long time so I ordered this since it was only RM 45 which comes with radish and cucumber and also kimchi appetizer, chawanmushi, rice, miso soup, watermelon. By the time I ate a little of this, I was already full. The tonkatsu is served with freshly ground sesame and also sweet sauce. Moreover, I feel that the tonkatsu has such thin layer of crumb that it even won my heart over compared to the one sold by Tonkatsu branch. I rarely opine Tonkatsu as tasty as I don't eat much pork let alone deep fried ones. The pork is deep fried till super crispy when you sink your teeth into it yet one does not taste the super thick layer of breaded crumb. They even serve a small spoonful of thin rice noodles with the bed of raw cabbage with yuzu sauce! I like picking on the noodles. 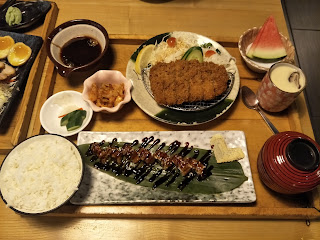 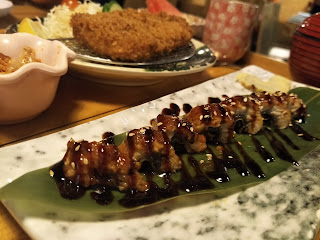 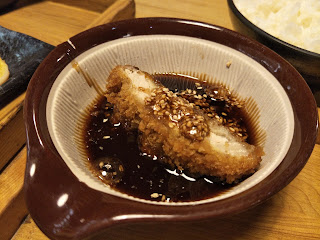 We were full to the brim after the hearty lunch and the full price paid including GST and service charge at RM 78.10 is just so worth the big portions!