We open the New Year 2021 with a Malaysian Local Food buffet high-tea in Double Tree Hilton KL, something I have never done! Normally, I will not eat in a buffet featuring local food as I felt that it is pointless since most of those can be found at local kopitiam and Medan Selera/Food Court but I bought it accidentally during the 11/11 Promotion by Hilton, whereby I spotted the RM99 for 2 pax buffet high tea and bought it as Jonathan has a sudden craving for buffet in November 2020. After getting the deal, I was initially a little unhappy when I got to know that we couldn't have buffets in hotels and could only do that after CMCO is over, which was in a situation that we never knew it will be ok so I waited till I started seeing hotels promoting buffets again and then I asked the Hilton sales person and she told me yes they could have buffet again! She was so nice to help me book a table immediately through Table App for 2 January 2021 which was the only available date I had as the other dates I was planning for a staycation on 19 Dec and then going to Penang on 24 Dec weekends.

Jonathan then said he has another buffet craving for 2021 New Year Dinner. I tried very hard to stop him from having a buffet just the day before we have the high tea buffet. We both thought very lowly of a Malaysian local buffet as how great can the food be, especially after I got to know they will feature a lot of curries. Thank god we didn't go for the New Year buffet on 1 January because when we went to Double Tree Hilton at Intermark KL for the buffet, we ate till I felt nauseous from all the food, sweet to oily and fattening food, from the humongous feast I had. In fact, it was the very rare occasion that I could not eat anything else after a lunch buffet! Guess I was too greedy?
Initially Jonathan even thought we were the only ones there because there were only us and another old couple at 12.15pm! The buffet actually starts at 12.30 pm and later we did see quite a lot of people celebrating their New Year there. There was even a Malay family of 30 who wore pink to have the buffet. Now, the current price for the buffet is RM99 per pax. 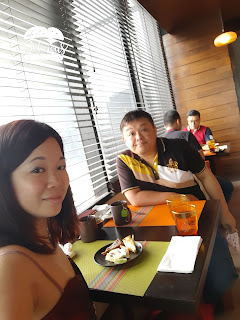 The only difference is during CMCO (Controlled Movement Control Order) period in Malaysia, the hotel buffets have SOP like guests must be served by the hotel staff to prevent you from touching the food or serving trays. Hence, my photos do not look mouth watering since I took them from 1 metre away.
The special thing about every Makan Kitchen in Double Tree Hilton is the amount of interior design that goes into the decorations to segment the Malay, Chinese and Indian food. In this hotel, the Chinese segment was as huge as the Malay & Indian segment and was complete with wallpaper of old Chinese buildings in Malaysia and has big emperor styled private room which can fit 11 people!
There were not only Chinese, Malay and Indian cuisine but also BBQ lamb, chicken wings and thigh, otak-otak, lamb and chicken satay too! For drinks, there were only normal coffee from the jug or assorted Dilmah Tea (Green Tea, Moroccan Mint Tea, Earl Grey, Camomile, English Breakfast).
As you enter Makan Kitchen, you are greeted by these array of delicious Kerabu made with scallops, chicken legs, prawns, chicken and all sorts of stuff and even have Pickles (Jeruk) from mango, papaya etc.

A one-metre distance view of the tantalising dessert bar, which was thank god, Western styled cakes and puddings than the kuih-muih I expected. The cakes are so-so, as none can compare to the ones in Majestic Hotel. I like the fact that they were sliced into bite sizes. There is 1 unique cake called Cendol Cake. Christmas log cake of Cherry pieces in between the cream was special too.

Indian Corner
The Indian curry are quite normal looking compared to the ones in Double Tree Hilton JB Buffet Breakfast where the curry is more flavourful and thick. I thought they would have live station making thosai but they say they only do this for breakfast. I vividly remember the JB Hilton freshly made thosai! The briyani looks more like Nasi Minyak as there wasn't much flavour inside.

This is by far, everyone's favourite station in the buffet area! There were BBQ chicken wings & thigh, lamb, chicken & lamb satay, small fish, even otak-otak! Over here, they serve all BBQ food with satay sauce, Malay styled dark sauce sambal or oily chilli  sambal.
The chef in the photo was the best one I ever seen. He even went the extra mile when he offered 2 skewers of baby octopus to us, which was specially grilled and sent to our table. It is out of the food spread as he happens to have some octopus leftovers. The BBQ chicken wings were the best I have ever tasted - so juicy and tender!

This is our favourite corner so far after the BBQ station due to the extravagance of the interior design where it felt like being transported to another era, of Old China, even better than conventional Chinese restaurants! Our favourite food were the roasted duck, szechuan soup, salted egg crab and stew lamb which we kept going for second and third helpings! The stew lamb was cooked in unique way which was not that Chinese, with chick peas and ladies fingers with thick gravy. There were also other food like mini steamed  pau and longan dessert.

The Chinese Interior that was reflecting Old China

Malay Corner
It was written that the Keli cooked with sambal was the feature item so obviously I tried and quite liked it. The Paderi Nenas (Pineapple) was not bad that I ordered 2 pieces.

The best item from the local desserts would be the Durian Tempura where for the 1st time, I ever say I love them as normally I hated anything made with durians. Probably because it was fried till so crispy and once you bite into it, the sweetness of the durian is felt as it oozes out. I even ate it with Mango ice-cream.

Overall, we were both so overly satisfied with the buffet which was unexpected to be so tasty and have so much variety! The weirdest thing was I woke up thrice last night worried about the outcome of the buffet thinking it would be a waste of our money and being something like the Shook! local buffet dinner we had on 19 Dec which cost RM110 per pax for walk in. Guess sometimes we should be a bit more positive and perhaps think that Double Tree Hilton normally doesn't disappoint as it lives up to its reputation! And lesson learnt, don't be prejudice over the words local buffet! The food was so good with great variety that I felt full till midnight! Seriously? YEAH RIGHT! And could not digest even after drinking 4-5 mugs of Dilmah tea at Hilton and made for myself ginger tea, lime nutmeg drink at home. 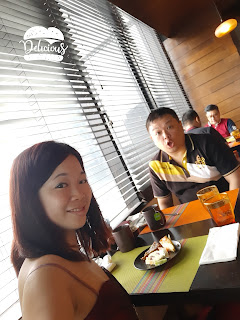